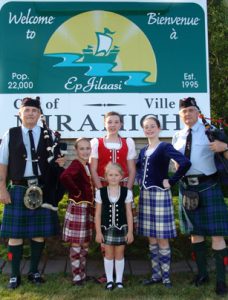 There is evidence that a Scottish Society existed on the Miramichi as early as 1827. This was the forerunner to the Miramichi Highland Society and was organized in Newcastle.

There being many societies and clubs in which Douglastown residents played an important role, it was a matter of having the meetings or headquarters of the society in the larger centers of Chatham or Newcastle which centered it apart from Douglastown.

At the time of the founding of the Highland Society, it was its principal objective to relieve the distress of Scotsmen and their descendants in the Miramichi Community. However, like so many other organizations, by 1830 the Society had become defunct.

This situation was turned around when, on November 30,1838, about 30 Scotsmen with William Simpson as chairman. met at Wyse’s Hotel. Their purpose was to form a North British Society. Their efforts bore fruit when, on November 19, 1840, with people in attendance from Tabusintac, Napan, Black River, and Bay du Vin, as well as from the immediate area, it was unanimously agreed to start a Highland Society of New Brunswick.

Later, at a January 13th, 1841 meeting, it was decided that an annual meeting would be held alternately at Chatham and Newcastle. Application was made to become a branch of the Highland Society of London. The first executive consisted of: James Gilmore, president: Alexander Fraser Jr., Dr Alexander Key and R.C. McDonald as vice-presidents; Robert Cassels, treasurer; James Caie and Neil McLean as secretaries.

Thus it was that on June 13, 1842, the parent Society, the Highland Society of London, granted a commission to the Miramichi Society which would be known as the "Highland Society of New Brunswick at Miramichi". It was incorporated on April 11, 1846. Following the presidency of James Gilmore, Dr. Alexander Key assumed that position from 1843 until his death in 1851. Next in line was Alexander Rankin in 1852 followed by Richard Hutchison who held office until his death in 1891. The Society continues today and is a truly Canadian organization clinging to a proud Scottish heritage.

The constitution of the Highland Society of New Brunswick at Miramichi states that "All persons eligible for membership in the society shall be of Scottish desend. "

1842
Charter was granted James Gilmore and Alexander Rankin under the patronage of Sir William Colebrooke, Lieut-Governor of the Province of New Brunswick, to found a branch of the Highland Society of London at Miramichi. At this time, the society had a membership of 151 with funds to the amount of L41 12s. 6d.

1861
The society decided to build a school at Chatham. This school became know as the Presbyterian Academy and was erected and equipped at a cost of L815 17s. 5d.

1882
The society suffered loss of its records, seals and other property when the secretary’s office was destroyed by fire. A scholarship of $50.00 was established open to daughters of members and $70.00 to sons of members.

1888
A new brick school was erected on the site of the old one at a cost of $5,200.00. This building was sold some years later to the Dominion Government for $6,000.00 and used as an armoury. It was used by the Town of Chatham as a recreational center until 1980 when it was demolished.

1904
The society granted $500.00 towards the erection of the Burns Memorial in Fredericton.

1912
The University of New Brunswick was paid $1,500.00 to establish a scholarship in the name of the society. This scholarship amounted to $75.00 per year.

1914
The society purchased 23 shares of Bank of Nova Scotia stock. Annual grants were made to the Miramichi Hospital. Over the years total grants to that institution amounted $18,000.00.

1917
A generous donation was made to War Relief Funds

1923
A contribution was made to the erection of a monument to be erected at or near Pictou to commemorate the 150th anniversary of the landing of Scottish settlers on the ship "Hector".

1968
Educational grants of $150.00 were made to students of Scottish descent; these grants have now been increased to $300.00 (1980). The society sponsored a Pipe and Drum Band, supplied them with uniforms and instruments and engaged an instructor. This band took and active part in many public functions and was a credit to the society. It became increasingly difficult to recruit members for the band and regretfully in1975 we were forced to discontinue and the instruments were sold-the society retained the mace.

1975
The society decided to support the annual celebrations of the Towns of Chatham and Newcastle by underwriting the cost of having a Pipe Band take part in these celebrations. Since then we have had the Heatherbelle Pipe Band of Pictou participate: in Chatham on the odd years and in Newcastle on the even years.

1976
An annual grant was established to the Miramichi Association for the Help of Retarded Children. The scholarship at U.N.B. increased to $500.00. Annual prizes awarded to the graduate of Grade 12 with the highest standing in English, at each of the High Schools in the area.

1983
A scholarship was established open to the sons or daughters of members for the first year only at any Maritime University. Value $600.00.

1984
New Brunswick’s Bicentennial Year: The society erected a polished granite Memorial Fountain in Elm Park dedicated to the Scottish pioneers of the Miramichi area and presented it to the Town of Chatham. This project was entirely financed by the Society.

1985
Enrolled as a member of the Friends of the Loggie Cultural Centre.

1988
Members of the Scholarship Committee to serve a five-year term.

1990
The ladies were our guests at St. Andrew’s Banquet. The first Miramichi Highland Week-end entertainment proved to be a highly successful venture. The Society purchased two units of the life Line program assisting in supplying a vital service to the seniors in the area.

A book titled " Scots at the Point" by Pat Hubbard was published. Twelve educational grants of $1000.00 each were awarded.

The first Silent Auction was held at the St. Andrew's Banquet to raise money for the Scottish Heritage Association Project at Wilson's Point.

A new curling trophy for use at the Robert Burns Celebrations was purchased. Cost $212.75

Monument to William Davidson was erected at Wilson's Point.

Scottish Weekend with the Venturers was organized by Dewey Gillespie. First Tartan Ball held at the Rodd.

A wharf was built at Wilson's Point to allow for boat tours.

Twenty educational grants of $2000.00 were awarded.

Official opening of the Scottish Heritage project at Wilson's Point with Lieutenant Governor Hermenegilde Chaisson and Lucille Campey author of "With Axe and Bible" in attendance.

A medal was struck to honour members who have contributed to the promotion of Scottish Culture on the Miramichi. It shall be named The William Davidson Medal and awarded this year to Benson Robertson. Winston Curtis, Jack Ullock and William Donan.

A Flag unique to the Highland Society of New Brunswick At Miramichi will have our crest with the Scottish Flag as background. It will be made by the Flag Shop in Dieppe.

At the March Executive and Directors meeting a motion was approved that the Highland Society of New Brunswick at Miramichi accept the Governments proposal for the operation of MacDonald Farm by the Society.

By-Law: The age of eligibility to join the Highland Society of New Brunswick at Miramichi will be 18.

Annual dues for membership increased to $10.00

It was approved that the minutes of the Society can be in typed form.

The Society will support the formation of a Scottish Portal by New Brunswick Multicultural Association.

Discussions held on the future of the Rankin House.

Friends of Beaubears given financial assistance to help bring grade 6 student to learn about the Heritage of the area.

Leon Bremner and Muriel Lamkey were awarded the Davidson Medal.

The 250th Anniversary of the arrival of William Davidson on the Miramichi will be celebrated during the year 2015-16.

A play based on the life and times of William Davidson written by Shawn McCarthy was purchased and will be shown on three evenings.

Neil Godsman from Scotland and a direct descendant of William Davidson invited to be the Guest Speaker at the St. Andrews Banquet on November 30th.

Twenty Banners for the light post in Chatham and Newcastle will be purchased. Ten will feature a Piper and ten the Scottish Flag. .They will be displayed during the Scottish Festival.

The Fochaber Fiddlers from Scotland performed at all events of the Scottish Festival. Dorothy Creighton and Manford Wasson were awarded the Davidson Medal.

The Rankin House is torn down

A Memorandum of Kinship between The Highland Society of New Brunswick and Miramichi and the Fochabers Heritage Society in Scotland was endorsed.

A $5000 award was made to John MacMillan in honour of the 250th Anniversary of the arrival of William Davidson on the Miramichi. It was to be awarded to a student enrolled in a program leading to a Masters or Doctorate Degree.

The future of the Murray House was discussed.

Tickets were sold on airfare to Scotland. Proceeds were given to the Food Bank.

By-Law change: By Law #4 re: Officer Bearers: The Historian, Chairperson of the Scottish Heritage Association and the Chairperson of MacDonald Farm Committee be added to the list of Officer bearers. The Chairperson to be non-voting members.

Matthew Stewart and Gregg Bruce presented a plan to start a Celtic Club at MVHS.

Bill Donald has 25 copies of the Pipe music Book written by the late Robbie Galliah.

Davidson Medal was presented to Plen Dickson and Paul Stewart.

Roy Macrae has been a member of the Society for 70 years.

Production of a video re: the Highland Society was discussed.

A $5000 Scholarship to be called : Highland Society Hutchinson Award was established to be awarded yearly to a student studying at the Masters or higher degree. Barry MacKenzie received the Scholarship this year.

Video regarding the Highland Society is in production.

a computer was purchased for the use of the Society.

The Highland Society Hutchinson Award was given to Dylan Hale.

Davidson Medal was awarded to Llewellyn Smith and Dawn MacDonald.

By-Law change: One must be at least 16 years of age to apply for membership in the Highland Society of New Brunswick at Miramichi.

Most activities including the Scottish Highland Festival and St. Andrew's Banquet were cancelled due to the Covid-19 Pandemic.

Commission
Whereas, The Highland Society of London was instituted in the year 1778, and incorporated in the year 1816, to associate together in the British Metropolis, the Nobility, Landed Proprietors, and other Natives of the Highlands, together with their descendants and the Officers of Highland Corps and Gentlemen connected by family alliance, or who have rendered some sigald service to that part of the kingdom.

"For the preservation of the Language, Martial Spirit, Dress, Music and Antiquities of
the ancient Caledonians.
For rescuing from oblivion the valuable remains of Celtic Literature

For the establishment and support of Gaelic Schools

And Whereas the said Society, to extend the benefits of their institution and to unite together in a central union their Countrymen, wherever situated, have resolved to issue Commissions for the establishment of Branches thereof in the British Colonies abroad, as well as in other places, abroad and at home where Highlanders are residents, and being extremely desirous that a Branch should be established in Miramichi, New Brunswick: You are hereby authorized and empowered in pursuance of this Resolution, to found a Branch of the Highland Society of London at Miramichi, New Brunswick, accordingly, with authority to make by-laws as may be necessary for the management thereof, in conformity to the principles and rules of the said Society.